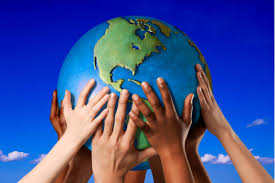 I don’t know about you but I have a number of multicultural students on my caseload who exhibit language deficits in both their birth language as well as English. Even though I am unable to speak their languages (e.g., Spanish, Hindu) I still like to integrate various aspects of multiculturalism into my sessions in order to support their first language as well as educate them about their culture and other cultures around the world as much as possible. Why? Because among other benefits (e.g., cognitive, linguistic, academic, just to name a few) studies have also found a connection between bilingualism/multiculturalism and higher self-esteem in children (Verkuyten, 2009). For me the latter definitely plays a huge part, since children with language impairments already recognize that they are different from their peers when it comes to their abilities and accomplishments in the classroom, which is why I try to support them in any way that I can in this area. Believe it or not it’s not as complicated as it sounds, and with a little ingenuity you can make it happen as well. Below are some suggestions of what you can do in sessions: Let’s start with books. Even if you don’t speak the child’s language or speak it very limitedly, you can use books with a few words in another language. For example, to introduce just a few words in Spanish I have used books such as ‘Maňana Iguana’, or ‘Count on Culebra’, by Ann Whitford Paul, ‘Abuela’ by Arthur Doros or ‘Old man and his door’ by Gary Soto. If you speak the child’s language proficiently consider using bilingual books in therapy sessions. To illustrate, I have used bilingual Russian/English books such as ‘Goldilocks and the Three Bears’ by Kate Clynes or the ‘Giant Turnip’ by Henriette Barkow with a number of preschool and early elementary aged children. Moving on to apps, while a number of them come in different languages, I particularly enjoy those which introduce the learners to aspects of another culture. For example, “The Magnificent Traveling Palace” is one such app. It’s an interactive storybook about four children embarking upon an exciting adventure after boarding a luxury train in India. The book allows the readers to learn about India’s occupations, foods, as well as listen to some beautiful Indian music. Another interactive book app entitled: “Henrietta is Hungry” introduces learners to a little girl who is an adventurous cook and loves to cook exciting new foods. As Henrietta sails the world in search of that perfect dish, readers are introduced to a variety of exciting world cuisines (e.g. sushi, curried dahl, chow mien, chili crab, etc) and are even provided with a recipe (granted it is a chicken soup LOL) at the end of the story. To continue, I often like to integrate geography and social studies into my sessions. When I first started working with school aged language impaired children, I very quickly realized just how limited was their knowledge of the world beyond the “here and now”. Many twelve and thirteen year olds did not know such basics as naming the continents or listing a few countries of the world. So I found a number of apps and books to introduce these concepts to them constructively in my language sessions. I have used units such as “The Earth” and “Maps and Mapping” from Linguisystems’ 100% Curriculum Vocabulary Elementary to teach general concepts of geography, and app such as iLearn: Continents and Oceans to teach continent names and locations. Those of you, who don’t use ipad in therapy, don’t despair! You can use online geography games from Sheppard’s Software Website to teach concepts pertaining to both world and US geography. Even with some of my youngest clients (5+ years of age) I’ve used Social Studies Emergent Reader Series by Scholastic to talk about the counties of the world and the people who live there. We especially have fun when we are learning about all the cool holidays celebrated in other countries around the world such as Loy Krathong Day from Thailand, Diwali from India, White Day from Japan as well as many others. Of course not everything is one sided. I also expect my students to teach me about their culture, language, customs, and traditions by bringing in show and tell items, books, and even favorite recipes which we attempt to incorporate into our sessions. I really enjoy integrating aspects of multiculturalism into my sessions and I’d love for you to try it out as well. I guarantee you’ll have fun doing it! References: Verkuyten, M. (2009). Self-esteem and multiculturalism: An examination among ethnic minority and majority groups in the Netherlands. Journal of Research in Personality, 43, 419-427. Helpful Resources:

Bio: Tatyana Elleseff MA CCC-SLP is a bilingual SLP with a full time hospital affiliation as well as private practice in Central, NJ. She specializes in working with multicultural, internationally and domestically adopted as well as at-risk children with complex communication disorders. For more information visit her BLOG, STORE, or follow her page on FACEBOOK.

Popular posts from this blog

January 25, 2016
With the crazy weather here in NY (see house pic nightmare of snow!) I wanted to share my adapted free book for winter clothing! This will be one of those short, late-night posts, so I apologize! I wanted to make sure this one got out to you guys!

I created this for use with an AAC device, but it really can be utilized for so much more! I've also used this activity to target vocabulary with an ESL student, following directions with a student targeting auditory comprehension, and as an introduction to the topic of winter!

The options are endless! Plus, I wanted to make this a freebie since I know I have been using tons of awesome freebies on TpT from fellow bloggers - gotta give back!

October 11, 2015
Just a quick check-in before I wander off into Sunday chili and sweatpants! I wanted to share this following directions packet I've been using for the month of October. I have a lot of kinders this year who came in with following directions goals. I've been trying to target them each session with fun, coloring crafts each time so they can see their work.
This packet is four pages, black and white, and FREE! It includes following 1 and 2 step directions, following varied directions, and following conditional directions. All the sheets are halloween themed and of course black and white for low-ink usage! Check out this scarily fun packet HERE on TpT!

July 27, 2016
This summer I pledged that I would work with more of the little little guys in my private practice - early intervention and preschool age. I love this age group and really missed working with them (currently I see preK through second grade in a school setting). Working in a home-based environment is incredible because of all of the great parent-training we get to do. I love being able to explain and show exactly what I'm doing and the strategies I'm using.

As all SLPs know, with this age group we are doing a lot of self and parallel talk. Sometimes I leave my half-hour sessions out of breath! Of course, talking is never an issue for an SLP!! I find that my parents are talking to their child, however their language needs to be modified, or they need to present things differently (i.e., giving options to elicit more language vs. yes/no questions).

I created this parent handout to familiarize my parents with what I'm doing and to emphasize effective carryover. I like to say …
Read more