June 15, 2012
Singing the ABC's can bring you back to your preschool days, help you wash your hands for a long-enough period of time, and of course help you with the first steps of understanding written language. It sounds simple enough to sing the song a few times, pair it with a visual, and then miraculously have your student be an ABC-expert. However, the ABC's of ABC are often more complex and can require  letter-by-letter teaching.

We're teaching the ABC's  to one of the little guys I have as a client this semester. For him, the distinction between the letters is difficult. To help him learn his ABCs we've created a receptive, matching task using this "Letter Box". He loves mixing up the letters in the box and then seeing which letter he pulled out. He then matches the letter he pulled out to the visual on the table. Usually, we have to pull the box away from him because we've spent 20 minutes matching letters and causing a small, alphabet earthquake! 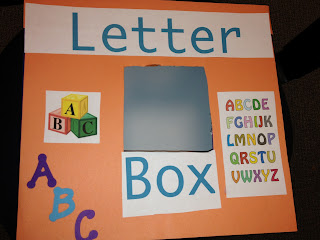 So here's how I made the "Letter Box":


Try this one out! Not just for letters, but for anything you might want to hide and match/name/categorize. It's a great activity and simple to make!

Popular posts from this blog

January 25, 2016
With the crazy weather here in NY (see house pic nightmare of snow!) I wanted to share my adapted free book for winter clothing! This will be one of those short, late-night posts, so I apologize! I wanted to make sure this one got out to you guys!

I created this for use with an AAC device, but it really can be utilized for so much more! I've also used this activity to target vocabulary with an ESL student, following directions with a student targeting auditory comprehension, and as an introduction to the topic of winter!

The options are endless! Plus, I wanted to make this a freebie since I know I have been using tons of awesome freebies on TpT from fellow bloggers - gotta give back!

October 11, 2015
Just a quick check-in before I wander off into Sunday chili and sweatpants! I wanted to share this following directions packet I've been using for the month of October. I have a lot of kinders this year who came in with following directions goals. I've been trying to target them each session with fun, coloring crafts each time so they can see their work.
This packet is four pages, black and white, and FREE! It includes following 1 and 2 step directions, following varied directions, and following conditional directions. All the sheets are halloween themed and of course black and white for low-ink usage! Check out this scarily fun packet HERE on TpT!

July 27, 2016
This summer I pledged that I would work with more of the little little guys in my private practice - early intervention and preschool age. I love this age group and really missed working with them (currently I see preK through second grade in a school setting). Working in a home-based environment is incredible because of all of the great parent-training we get to do. I love being able to explain and show exactly what I'm doing and the strategies I'm using.

As all SLPs know, with this age group we are doing a lot of self and parallel talk. Sometimes I leave my half-hour sessions out of breath! Of course, talking is never an issue for an SLP!! I find that my parents are talking to their child, however their language needs to be modified, or they need to present things differently (i.e., giving options to elicit more language vs. yes/no questions).

I created this parent handout to familiarize my parents with what I'm doing and to emphasize effective carryover. I like to say …
Read more